Flowers and candles are left on July 26, 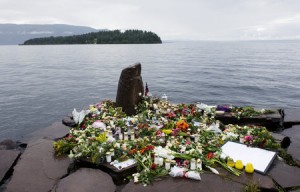 Flowers and candles are left on July 26, 2011 on the coast of lake Tyrifjorden infront of the Utoeya island in honor of the victims of the July 22 shooting spree at a Labour Party youth summer camp on the island of Utoeya. The lawyer for the Norwegian gunman who claimed responsibility for killing 76 people in twin attacks last week said today that everything about his client’s case indicates he is “insane”. AFP PHOTO/JONATHAN NACKSTRAND (Photo credit should read JONATHAN NACKSTRAND/AFP/Getty Images)